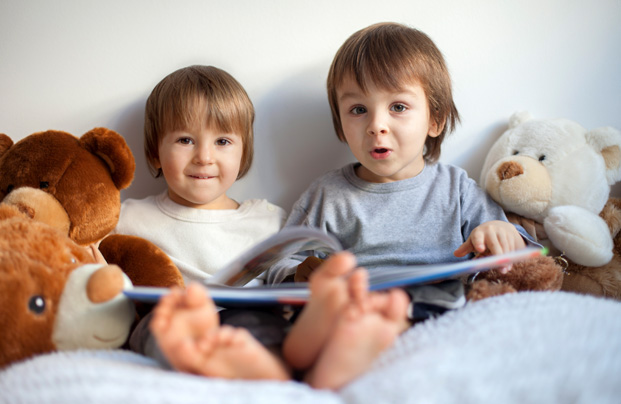 Theme: Backwards, Forwards, Or From A New Angle

When the zookeeper locks up the animal cages one by one, the animals follow him silently throughout the entire zoo as he says goodnight to each animal. Leaving their cages behind, they follow his beam of light to the zookeeper’s house and do not sleep until he is safely in bed beside his wife! Have you ever followed a light in the dark? What did you find at the end?

Painter’s apprentice Mauk eagerly follows the lines of his master’s paintings, and the text follows his journeys. Based loosely on the work of M.C. Escher, the illustrations for this book feature visual tricks and altered perspective. At the end of the book, turn the book over to read from back to front. The same illustrations give a totally new point of view. What else have you looked at upside down to see things differently?

As your trip in this book begins, the buildings of the city are in black against the much lighter sky. To complete the round trip, flip the book over and go through the same pictures in reverse to see the city buildings against a dark horizon. Would you rather take a road trip during the daytime with the sun as your light? Or do you prefer the night time and the lights of the buildings, roads, and cars lighting your way?

In this book with few words, the image of the letters “OK” is turned on its side, upside down, and any which way to show people in various occupations and times. The message is that it’s OK to do whatever you might like to try. Which of the drawings surprised you the most?

Try your hand at drawing some more pictures using the OK figures like in the selection, The OK Book.

Try walking and jumping backwards! Then try running to the back of the room with your backside going first!

Draw some random squiggles and talk with your family about what they look like. Then turn the page around to find something totally different.

When reading with young ones, sing along with the books you read if songs come to mind. Sing if the book has songs in it. Emphasize the rhyming words in a book written in verse. Your child will remember this book very well because of the repetitious elements the music creates. For a demonstration of how to do this, click to "Watch the video."